The Lithuanian men’s U19 team will be the only youth team that will take part in the official FIBA ​​tournament this summer – the world cup in Latvia. After last week’s draw ceremony, it became clear that the Lithuanian national team will start the tournament in the group together with the national teams of Canada, Japan and Senegal.

To the training camp, which will start on June 1st in Klaipeda, the head coach of the team Gediminas Petrauskas invited 16 players.

“The list of candidates changed after realising that there will be no other tournament this summer such as U18 and so on. This allowed us to select players from younger age groups. As a result, the choice was certainly greater than before. The training camp and friendly games are fully prepared. We have a bit of a hassle due to the fact that several players might arrive late to the training camp due to extended seasons. We also have a number of players who will have to finish their the secondary school exams, but those things are not controlled by us.
Almost all of the friendly matches are set up, we are satisfied that we will be able to play with the team USA and other strong national teams”, – said the head of the Lithuanian U19 national team Gediminas Petrauskas.

„We are glad that the players are healthy and no player refused to represent Lithuania. Working together with LSMU Sports Medicine Clinic Professor Laimonas Šiupšinskas, we performed functional tests for players, according to which we identified the condition of the players and physical training coach Mantas Valčiukaitis created an individual preparation plan for each playe”, – said G. Petrauskas

U19 World Cup will take place on July 3-11 in Latvia, Daugavpils and Riga. 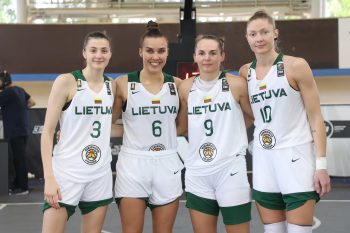