On Tuesday, a meeting of the Executive Committee of the Lithuanian Basketball Federation (LKF) was held in Kaunas, where the most important current issues were addressed.

LKF President Arvydas Sabonis was pleased that the in the near future basketball federation will financially award Lithuanian basketball coaches.

“Following the results of LKF activities, we have the opportunity to financially award coaches who have contributed to the development of players for Lithuanian national teams during the last Olympic cycle. We believe that this beautiful tradition will be continued in the future after each Olympic cycle, thus the basketball coaches will be rewarded for their work”, – said LKF President Arvydas Sabonis.

After the meeting, LKF Secretary General Mindaugas Špokas talked about the agenda of the meeting and also expressed his positive thoughts about the coach reward scheme.

130 thousand euros is intended to encourage and motivate the best coaches. The Commission of Excellence should prepare a regulation within a month, and according to that regulation, the best coaches in the country should be honoured and rewarded before the annual conference”, – said LKF Secretary General Mindaugas Špokas.

M. Špokas also spoke about the upcoming LKF presidential elections and the reasons why it cannot be held earlier.

„We cannot do it earlier due to simple reasons. All candidates must apply by 23rd of July. Approval of documents takes around a month. Organisation the conference to the highest standard also takes a month. We simply do not have enough time to do it any earlier.

Not even mentioning the summer jobs. Gathering the community in August would be a challenge, as previous conferences have shown. We hope that on September 7th we will have all 136 members who have now been approved and have the right to vote. Once again, I would like to have everyone attend the conference and express their vote and, by the way, I want to call on those who did not register their candidacy yet.

Lastly, M. Špokas was asked about the recently surfaced idea about the desire of Lithuania and Ukraine to jointly organise European Men’s Basketball Championship in 2025.“

„There is a huge competition in the host country run. 2025 was not on our plan, but it was always an option to consider. The new management may develop it more. We have proven our excellence and competence through three ‘bubble’ tournaments, two European Championship Qualifications and the Olympic Qualifying bubble, which we have performed prestigiously well. I think we are capable of doing that.

The issue is investment and payback. We see that tension is not easy to deal with, we already have such experience when we had a fantastic team in 2011, we lost at home in the quarterfinals and our journey ended just like that. We have got exactly same situation – we had a fantastic team and were really close, but we had Slovenians leave Kaunas with the ticket to the Olympic games.” 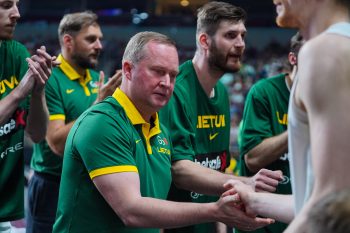 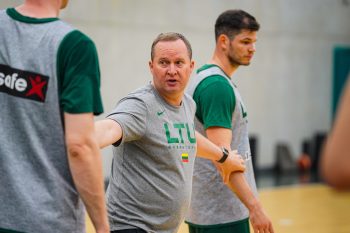